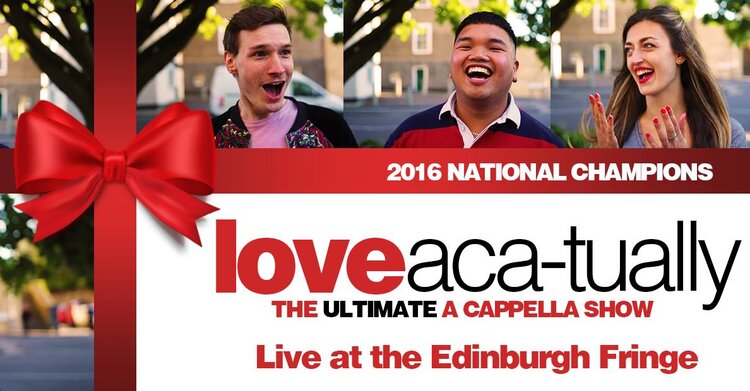 Roses are red, violets are blue, The Bristol Suspensions have a show to do – but what happens when Cupid shoots his arrow into the rehearsal room? After months spent together perfecting their set, sparks have started to fly between these young performers – and not everybody is happy about it. From romance and relationships to rumours and rage, find out the hilarious truth about what goes on behind the scenes in a world-class a cappella group in Love Aca-tually!

Fresh from placing in the top-12 groups in the world at the ICCAs, the best of the South-West are back with award-winning arrangements of hit songs, from Stevie Wonder and Elton John to The Pussycat Dolls and Foo Fighters. Bristol’s premiere collegiate a cappella group invites you to a dazzling display of vocal mastery illustrating the highs, lows, heartbreaks and happy endings of romance.

Following their previous hit shows, A Suspension of Disbelief, I Can’t Believe It’s Not Instruments – and their Official Edinburgh Fringe Sell-Out show – Netflix and Trill, The Bristol Suspensions are back by popular demand for their fourth successive year at the Fringe! But it’s oh-so-much-more than just singing – this group are known for their iconic stage presence, dazzling dance moves and super-human sounds, which earned them three awards for Outstanding Choreography, Arrangement and Vocal Percussion at the International Competition of Collegiate A Cappella (ICCAs). With a hilarious yet moving storyline to tie it all together, the Suspensions promise a triple-threat show of the highest order.

Having established themselves in only 2014, The Bristol Suspensions have launched themselves to the top of the UK Collegiate A Cappella scene, winning the Voice Festival UK in 2016, placing in the top three of the ICCA UK Finals in 2017 and 2018 respectively, and recently becoming the first UK group to ever place in the top-12 collegiate a cappella groups in the world in the International Wildcard Round. On top of their 2017 US tour, they have performed to standing ovations all around the UK, and last year made their TV debut on BBC One’s Pitch Battle.